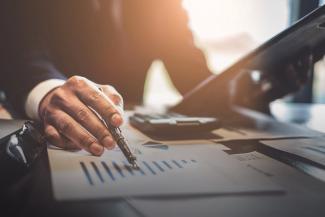 A well-diversified portfolio can be your best friend

It is important to us that you are well informed about what is happening in the markets. Here are a few of the key topics of conversation that we feel deserve the most attention this month. If you have any questions or would like to continue the conversation, let us know, we appreciate the opportunity.

Inflation notched up AGAIN in January with the Consumer Price Index showing prices increased 7.5% over the past year and 0.6% over December[1]. While the price increases were broad-based across the economy, energy, food, and rents continue to push the index higher. Core inflation, which excludes food and energy, rose 6.0% and previously quiet categories, such as medical services, rose.  This is perhaps the most emphatic data point that points toward more aggressive Fed interest rate intervention.

Following the inflation report, market volatility ticked up substantially on concerns about monetary policy and the upcoming Federal Reserve meetings. With the next Fed meeting in mid-March, the market is expecting either a 25 or 50 basis point hike in the Fed’s target rate coming out of that meeting. Looking across the remainder of the year, the market is expecting a rate increase in six of the seven remaining Fed meetings[2].  That being said, raising rates that many times in an election year will be tough to accomplish.

Inflation continues to plague consumer sentiment, which caused the University of Michigan’s Consumer Sentiment Index to drop over 5 points to 61.7 in February[3]. Expectations around the future state of the economy fueled the downward move, though feelings on current conditions also fell.  Interestingly, this may be a case of “bad news is good news” since the Fed closely watches this data to determine how much of a rate increase the investing public may tolerate.

In positive news, the jobs market provided a nice surprise in January with 467,000 jobs being added to the economy[4], well above the 125,000 that was expected by economists according to a Bloomberg survey. Also, the past few months’ figures were updated to reflect the 709,000 more jobs that were added to the economy, showing that hiring momentum was stronger than thought over the past couple of months. While the unemployment rate did slightly increase to 4.0% from 3.9%, that was largely due to an increase in the labor force participation rate, which rose to 62.2%[5].  In other words, people who had not been looking for work are now being enticed into the job market by higher wages.

Finally, markets continue to monitor the situation in Ukraine amid conflicting reports of Russian troops withdrawing from the border while NATO said the military buildup has continued.  While an invasion would not necessarily constitute a long-term problem for global economics, it could cause substantial price volatility in oil and gas... and stoke potential issues with Russia’s ally China.

The bottom line: There isn’t a great way to sugarcoat this, but we expect equity markets to remain volatile through the first half of 2022 due to Fed interest rate activity.  Although bonds face headwinds as interest rates rise, they’ve historically played an important role in limiting risk.  In periods like this, a well-diversified portfolio can be your best friend.